Hundreds of witnesses saw a UFO land in Westall, Australia in April 1966

On April 6, 1966, in the Australian suburb of Westall, hundreds of students, staff and local residents watched as a strange object hovered overhead for several minutes, landed briefly, then lifted off and vanished. Witnesses described it as low flying, silver-grey and shiny, shaped like a ‘cup turned upside down on a saucer’ and accompanied by five light aircraft. 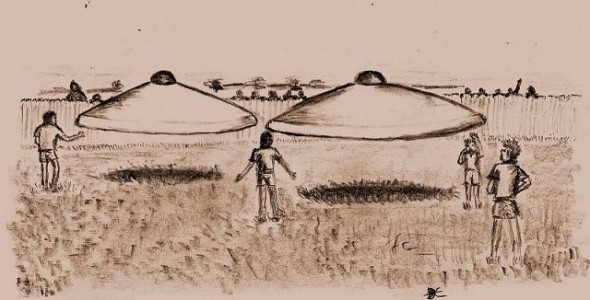 A mass of excited students surged out of school and ran after the object. Many reported seeing a circle of flattened grass on the ground where it had landed. Others observed men in uniforms cordoning off the ‘landing site’ and removing soil samples by the truckload. Some say they saw uniformed men torch the area a few days later.

The incident was reported on television news that night and in the local newspapers. But despite the evidence, that day at Westall High School, the headmaster called a special assembly. He told students and staff that they had not seen a flying saucer — in fact, they hadn’t seen anything at all. And they were not to talk about it to anybody.

On June 4, 2010, a 50 minute documentary called “Westall ’66: A Suburban UFO Mystery” aired on Australian TV. It’s very well produced and gives an excellent account of the strange 1966 sighting. Watch it below in four 15 minute parts.

Close encounter with large UFO near Clark, South Dakota in 1966

UFO that stops mid-air captured over Melbourne, Australia in January 2013