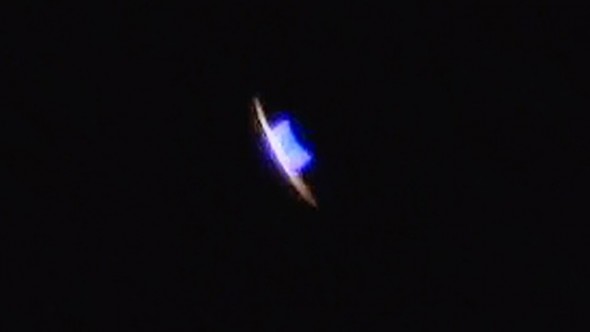 A resident of Albanvale, Melbourne says he has video footage of a fast-moving disc-shaped object that he and his neighbour witnessed at around 19:00 on September 11, 2012.

The object changed color — switching between green, red, and blue — and displayed extraordinary manoeuvrability and agility.

While sceptics say the object may have been a remote controlled toy plane, the man behind the camera says it’s not possible and that he is convinced it was not of this earth.

The sighting is corroborated by at least one other witness, who gives this statement:

I’m not one to give credence to this type of story however, I now feel validated and am compelled to share with you my experience, as I too watched in excitement and bemused astonishment as the strange object hovered and rapidly darted around very high and unusually brightly in the night sky all the while changing colours (red, purple, green, blue, white) then disappearing (as if the lights went out) for a few seconds and then returning.

So strange it was that I had to call my wife out to make sure that I wasn’t seeing things, she watched for a short while dismissing it as some “remote toy thing?”. In total I caught about 10 mins of this phenomenon before it rapidly drifted off out of site.

As a staunch sceptic and avid non-believer of ufo’s and alien sightings etc., it does trouble me somewhat to recount this (normally reserved for sensationalist attention seekers) however, after considerable thought I could not come up with a logical explanation of what I saw.

Update — footage may be released soon.