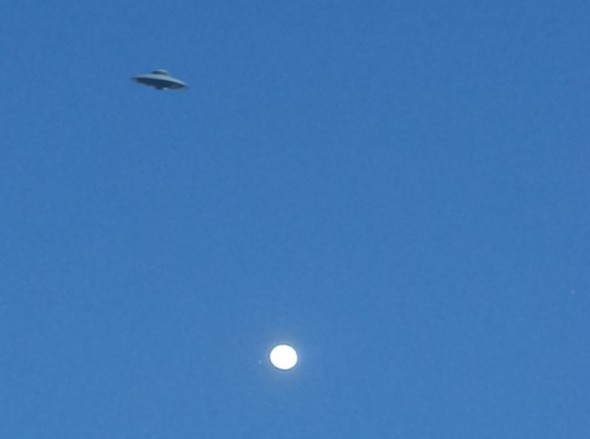 According to a local news outlet, this disc-shaped object was photographed over the Caribbean island of Bonaire on December 25, 2012. The pictures certainly look amazing at first glance, but will they hold up to closer scrutiny? The below report — that was sent to the UFO Casebook — does sound sincere, but this is the Internet after all.

I am from Bonaire, Dutch Caribbean; this is a Dutch island north of the Venezuelan coast.

Our sister islands are Curacao and Aruba. We have a bright night free of clouds and with naked eyes we can see a planet close to the moon.

A friend requested her daughter to please take a picture of the moon with her telephone and in two pictures we discovered a strange object like a flying saucer or UFO.

In each picture the object is in another position.

In the third picture it was gone. This phenomenon or else scared the girl who took the pictures. They sent them to me where I can see them better on my large pc screen. 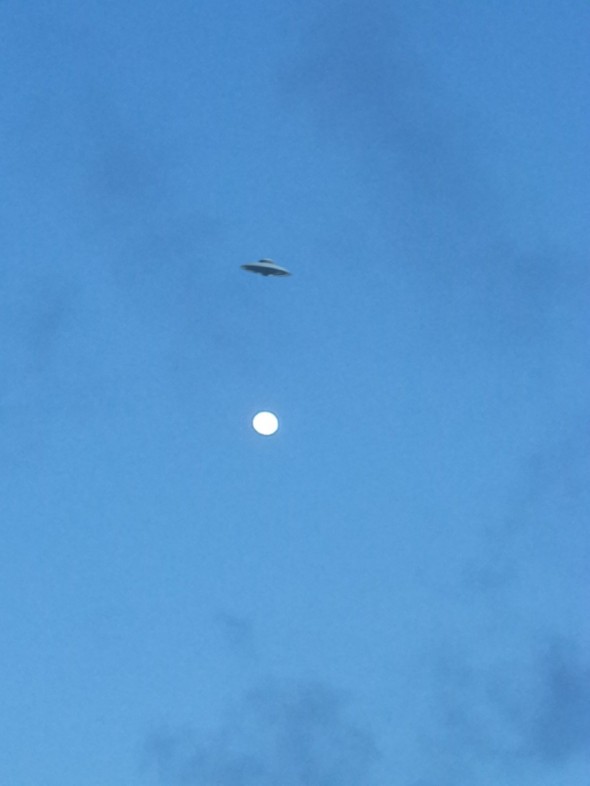 It’s amazing and this is not a joke. I checked on the Internet to see if there any other sighting reports today, Christmas Day and found your site.

Further to my previous message, I hereby attached the 3 pictures. Pic was taken by Ziggy Mansveld yesterday as per my report.

Be informed that her sister also took a picture with the object, but in her fear deleted her pic. This was also witnessed by a friend of them from Curacao who is on vacation.

Please find attached the pictures emailed to me directly from the Samsung Galaxy smart phone used to take the pics. They are of better quality.

For your information Bonaire geographical position is N12° 9.6501′ (longitude), W068° 18.2625′ (latitude) and this proves pictures were taken here. The time frame is very important.

Take notice that pic number two you have to flip it. You will notice on pic no.2 and 3 that planet Jupiter could be seen clearly at left side of the moon. Just for your information, yesterday a person reported to me that he saw the object on same day at 18:15 hours when he walking to a friend’s house. He declared that the object was floating and suddenly moved very fast away.

He thought it was just his imagination and did not talk about it with anyone until he saw the article with pictures in a local newspaper.

He claimed that what he saw looked similar to the object on the picture. Other information, our local airtraffic control was also sent a request to check whether they had any object on their airport radar. They informed me today that it will take some time before they can let me know.