This metallic-looking object was spotted over Gramvousa, Crete on August 19, 2012. 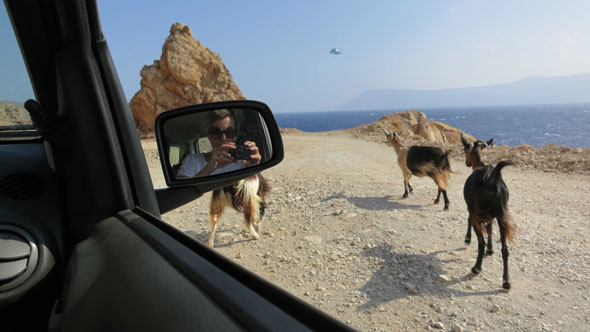 The photographer didn’t see the object while she was taking the picture, but only became aware of it later while she flicked through the photos on her camera.

On August 19 of this year (2012) my husband and I were driving towards a very beautiful beach called Balos beach, Gramvousa in Crete where we were on a holiday break. We were driving on a long dirt road to get to the beach and because of all the holes and humps in the road we’re driving really slow. At some point during this half hour drive a hurt of goats were on the road, sort of walking with us so I started taking pictures of the situation. I took some shots leaning out of my opened window and shot the pictures with my reflection in the mirror, the goats walking with us and the spectacular view. At some point I got out of the car and took some more shots. 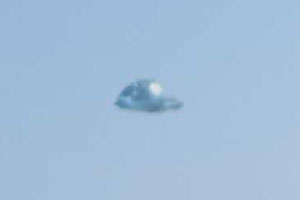 One and a half hour later, when we finally arrived on the beach after a long climb down hill it was very, very windy, almost stormy so we decided to hide in one of the beach-cafeteria’s and we scrolled through the shots on our camera to see what I photographed. This is when we first noticed there was something in the sky on just one of the shots I took. We zoomed in on our camera screen and could not believe what we saw, such a strange shape. We immediately started discussing possibilities to define what it could be, but had no idea.

We didn’t notice anything was in the sky when I took the shot. We didn’t experience anything strange. It was a warm, sunny day, but there was a strong wind out of the Northeast. There was no sound.

UFO researcher Jeff Ritzmann has done an extensive analysis of the image and his conclusion is that it’s genuine.

As of this date, in the technical sense I cannot explain the object in the photo by any rational means, and it does appear to be an unknown object in the sky of considerable distance and size. What is seen, is truly there and present in the photo in my educated opinion.

You can read Jeff’s complete analysis over at Above Top Secret — link.