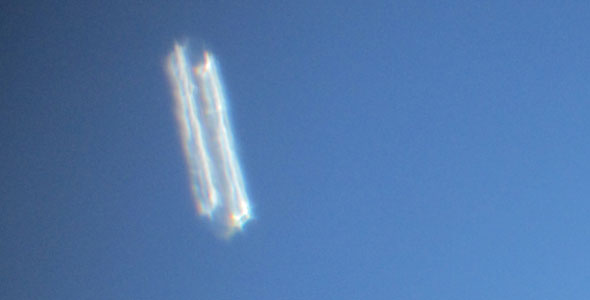 On October 16, 2012, this cylindrical, translucent object was photographed over Virgie, Kentucky. At first glance, one would think that the object is a simply motion blur resulting from slow shutter speed, but this is not the case. The camera was fired with a shutter speed of 1/125 seconds, which should be fast enough considering the eyewitness say the object was stationary.

My neighbors small daughter noticed a very bright star that shown in the middle of the day, that didnt move, and brought it to my attention. The sky was clear, free of clouds, and blue. Visibility was unlimited. The temperature was in the upper 60s.

I had 4 visitors at the time and they all called to me to come out and look up at something strange. I got binoculars and was stunned to see a bright object that looked cylindrical, with two bright white fluorescent tubes on its sides, hanging very high in the sky. I have an 8″ Meade SCT telescope and observed it at about 150 power and it was extremely clear, unmoving, or barely moving, hanging very high in the atmosphere. It was so high, it didnt appear to have shape except through binoculars. It moved ever so slightly that I used the telescopes controls to keep it centered, but it never moved more than 10 degrees from the original position in an hour and a half.

I used my Canon digital camera and took about 50 photos of the object through the telescope and then shot some video also. It oscillated between dim to very bright, (sunlike), on a frequency that varied but was of about 30 seconds. 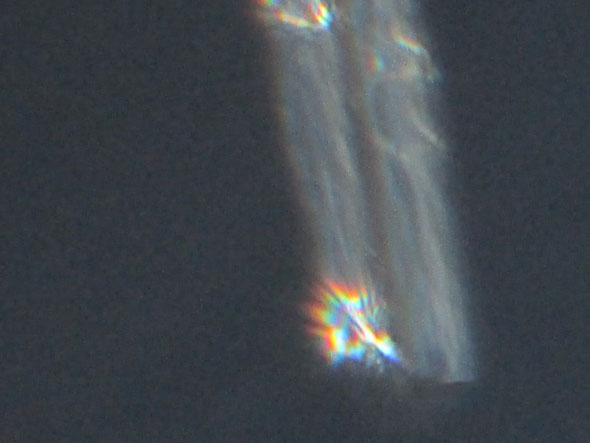 Close-up of the cylindrical, translucent object photographed over Virgie, Kentucky.

None of those things fit this description. It appeared to be cylindrical in shape, semi transparent, and had two very bright lines of light, vertically on its outside edges. Being an amateur astronomer, I know my planets and heavenly bodies and it was none of those. After about 2 hours of observing it through my telescope I came in to post my photos on facebook and during that time my wife came in and said it had disappeared.

Video of the object:

Any ideas what this could be?