Close encounter with large UFO near Clark, South Dakota in 1966 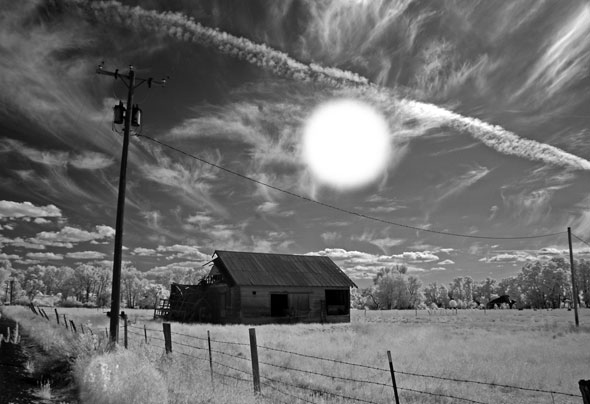 Artist’s rendering of light seen over South Dakota, US in 1966

Here’s another mesmerizing account of a close encounter with a huge, silent craft that left a lasting impression on the witness.

The scene is rural South Dakota in 1966. The witness and his family were on their way to a small town not far away from their farm when they noticed a bright light in the distance. What follows is a chilling encounter with something that can only be described as other-worldly.

I have seen so many TV shows and read so much about different UFO sightings and 99% of the time, it is a light miles away, or something so vague, nobody would have a clue what it was. The sighting we had was a long time ago, so you are probably not interested anymore, but I remember it like yesterday.

I was in 7th grade. My friend was spending the night at our farm and we, along with my parents were on our way to a small town about 7 miles from us. We were 1/2 mile north of our farm, going north, when we noticed a very bright light to the east/southeast of us, probably a 1/2-1 mile away. It appeared to be very close to the ground and either hovering or moving very slowly. My Dad said it had to be a helicopter and possibly a game warden or similar.

About another 1/2 mile to the north was my Uncles farm and there was a big hill that the road cut through. We went in an approach into a field where we could get up to the top of the hill. We watched the object, still distant slowly moving to the northwest. We watched it for 2-3 minutes, and then the bright light went out and we couldnt see it anymore. We watched for a couple more minutes, seeing nothing and then it appeared again northeast of us, still heading northwest.

Myself, friend and Mom were kinda scared, but my Dad said he would hurry and get back on the road heading north and see it when it crossed the road to show us that is was a helicopter. We had a pickup and were probably going 70 MPH. When we got somewhat near, the pickup engine just stopped. Headlights and everything else was on, just the engine quit.

We coasted quite far until we stopped almost where the object would cross the road. It was probably 20 feet above the power lines and maybe 50-100 feet ahead of us. It was within the range of the pickup headlights, but was just above the lights. It hovered, maybe moved super slow. The big light had gone out and there were different colored small lights on.

It was hard to make out the shape, but we could see that it was big. Absolutely no sound, nothing. It maybe took 2-3 minutes to cross the road. When it was to our left and still visible, it just disappeared. The pickup had tall side racks on the back and I remember when the object left, there was huge gusts of wind that rocked the pickup bad. The dust was moving right to left, going the same direction as the object. I remember we couldn’t see the road with the headlights on, only dust flying. Still, there was no sound.

After it left, my Dad started the pickup up and we continued on to town. It was really strange, but no one spoke anything about it, we were just silent and drove to town. My friend and I told a buddy about it, but he just laughed. We also told our science teacher about it in class and then everybody laughed at us, so we just dropped it.

My parents are now deceased, but my friend and I talk about it occasionally. I just wanted to share this. There is really nobody else I know of that can relate to what we saw. Thanks.

Hundreds of witnesses saw a UFO land in Westall, Australia in April 1966