The UFO photographed by Hannah McRoberts in 1981

Mrs. Hannah McRoberts (aged 25) of Campbell River, BC, was with her family at a rest-area some thirty miles to the north of Kelsey Bay on the east coast of Vancouver Island, from October 8 to 15, 1981.

During this five-day period she says she took a number of pictures of her family and of the local scenery, using her 35 mm Mamiya camera with a 50-55 mm lens, 125 speed, and ASA 100 film.

At one point during the holiday they observed that one of the mountain peaks was surmounted by a cloud somewhat suggestive, as they described it, of “a volcano issuing steam,” so Mrs. McRoberts snapped that as well.

None of the party noticed anything else in the air at the time, and the presence of the UFO was therefore only discovered by them when the prints and negatives came back to them after processing. 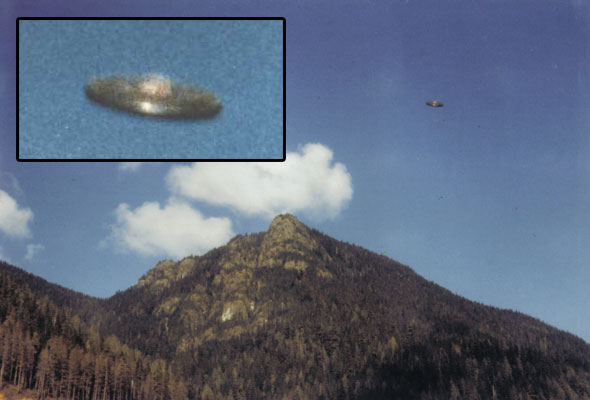 The resulting photograph shows an object to the right of and above the peak and the plume of cloud. This photo came to the attention of Mr. David A. C. Powell of Vancouver, who is on the staff of the McMillan Planetarium in that city, who in turn contacted Bill Allan, and provided him with an enlargement, and also got in contact the APRO of Tucson, Arizona, the respected American UFO investigation group who claim now to be the oldest in the world.

After many examinations of the photo, the negative was finally delivered to Richard F. Haines, Editor of the Journal of Scientific Exploration for analysis.

Haines determined that what Hannah had captured unwittingly in her photo of the mountain was a genuine airborne object and not the result of emulsion deformity or optical illusion of the camera’s inner mechnisms.

From Report: Abstract–This report reviews various investigative activities and analyses surrounding a photograph of a purported unidentified flying object (UFO) taken on October 8, 1981, at about 11:00 AM, local time on Vancouver Island, British Columbia.

The evidence consisted of a single frame of 35 mm color film which showed a sharply focused disc-like object against a clear blue sky with wooded mountain peak nearby.

Analyses of the original negative included micro-densitometry, computer enhancements, and other measurements intent upon showing a support thread, atmospheric disturbance, or other evidences of a hoax.

These analyses suggest that the disc was a three dimensional object located at a distance of at least 30 feet from the camera; the object’s surface albedo was diffuse and of lower luminance than a sunlit cloud. Extensive interviews with the photographer (who never saw the aerial object), her husband, and daughter and site survey tended to support the entire narrative account.

The identity of the disc object remains unidentified.

The family was on their way to visit her sister at Holberg, located at the northwest tip of Vancouver Island. Mrs. D.M. was an outgoing, pleasant person with a casual interest in UFOs. Inspection of their home did not indicate any interest at all in the occult, the psychic realm, or related subjects.

Mr. D.M. worked at the lumber mill in Campbell River.

Neither person claimed to have read any books specifically on UFOs, but had seen the movie “Close Encounters of the Third Kind.” The husband was an avid science fiction fan in earlier years.

A battery of optical tests were performed on the negative to determine the physicality as well as the possible size and distance of the UFO from the camera. This included visits to the site of the photograph.

When asked what they had done immediately after noticing the disc on the photograph (some 18 days later on October 26, 1981), Mrs. D.M. replied, “Well, we didn’t know what to do. Eventually we showed it to our neighbors and Mr. and Mrs. M. Sr. (husband’s parents).”

Mrs. D.M. phoned the Canadian Forces Base at Comox in mid-November 1981 concerning their possible interest in seeing the photograph. She “. . . just wanted to see if they were interested in it and if they knew anything about what the object could be.”

An Air Force representative (allegedly) said they were not interested in viewing it, but did take her name and address. It was not until the summer of 1982 that the family traveled to Vancouver, B.C. bringing one 4″ x 5″ color print with them.

They visited the Vancouver Planetarium and spoke with the Director, David Dodge, who called in David Powell who was interested in UFO phenomena. The couple were persuaded to lend the original negative to them to make enlarged copies.

The negatives were delivered to Mr. Powell in June 1982, and were returned to Mr. and Mrs. D.M. on January 28, 1983. These dates may be significant since they suggest that the photographer was willing to wait a long time before pursuing an explanation for the disc-like image on her photograph.

If this event had been a deliberate hoax, it is more likely that some overt action to capitalize on it might have been taken soon after the disc had been discovered, and not almost a year later. Of course this is not a conclusive argument to support this contention.

The author found the photographer and her husband to be middle-class, hard-working people. Their property was well kept. Nothing could be found which pointed to a deliberate hoax. Both displayed genuine puzzlement about the origin of the disc on the photograph. Mr. and Mrs. D.M. were not defensive nor did they ever attempt to cover up anything as far as could be determined.