My uncle witnessed an alien craft landing in 1954 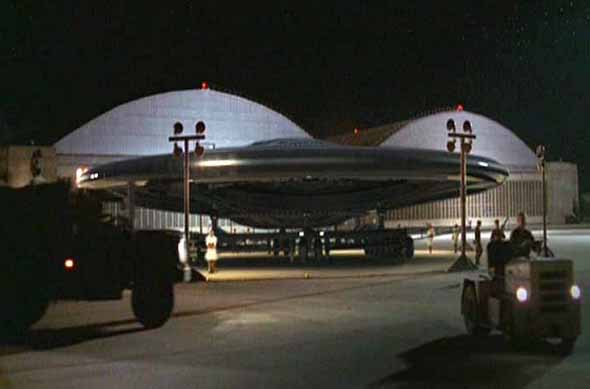 The following events reportedly took place on an Air Force base in Greenville, Mississippi on June 20, 1954. The report, that was recently submitted to MUFON, describes a disc shaped craft that unceremoniously landed outside an aircraft hangar. The pilot was a small-sized alien.

My uncle was an electronics specialist and a civilian employee at the Air Force base in Greenville, Mississippi in the mid 50s. One day some military authorities escorted him and several other civilian employees into a large aircraft hangar and ordered them to stay there until they were told they could come out. None of the mens questions about what was going on were answered. The military men closed the hangars doors and left.

The men in the hanger hung around the area where the hangars doors came together, and they discovered they could peek outside and see what was going on. A disk shaped aircraft about 40 feet in diameter descended vertically and landed on the tarmac outside the hangar. Several men with cameras filmed the entire incident from an elevated scaffolding. Other cameramen stood on the ground.

A door opened on the aircraft and a child-sized alien being walked down a short ramp. The alien used a hand-held computer to communicate with the military personnel. The aircraft was on tripod landing gear with wheels, and several men were ordered to pushed it into the hanger across the way.

I was a teenager when I heard this story and my reaction to it was a mix of uncertainty and disbelief. My uncle didnt have any reason to lie about it, but… Years later, I was watching a program about UFOs on television, and a man who saw the same event described it exactly as my uncle had described it years earlier–in every detail. I was amazed, but while I have seen many UFO programs on television repeated several times, I never saw that particular interview again.

I now realize the importance of that event, but my uncle died several years ago, and I imagine that the other witnesses are probably all dead as well. Just the same,I wanted to get this information out there for what it is worth, so here it is. I hope it proves to be beneficial. Our government isnt about to confess that it has lied to us about UFOs since 1949. Doing so would destroy what little credibility it still has.

Does anyone recognize the story? Would be interesting to see that interview.

It’s reasonable to assume that the TV program in question is this interview with David Adair, where he, among other things, speaks about Area 51 and advanced rockets engines.

(Thanks to Reddit user whosmav for finding the interview)