On January 23, 2013, a commercial airline pilot on a flight over Costa Rica captured a UFO as it zipped past his aircraft. One of Costa Rica’s largest news stations, Canal 7, did a report on the pilot’s sighting. The segment is in Spanish, but a YouTube user has been kind enough to provide an English translation:

The video was captured by the commercial pilot Joseph Daniel Araya, who has more than 500 flight hours. Araya says he was recording with his cell phone when suddenly the camera screen saw the object moving, when he looked out of the aircraft there was nothing, said the pilot.

To find an answer to what happened we went to Jose Alberto Villalobos, astronomer and UFO researcher Alexis Astua.

Villalobos estimated that the object on the screen could have a length between 7 and 10 meters. Its speed could reach 3,600 kilometers per hour, seven times more than the ship from which the footage was captured.

Meanwhile Astua does not rule out a UFO but also a secondary reflection theory. The sighting in the South is not strange, since in this region there are constant reports. 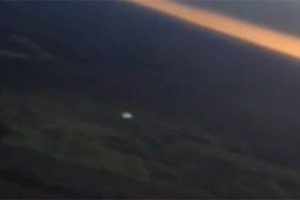