This video was given to me by a pilot that use to be in the air force and now is in corporate aviation. The video shows an object he captured on video during a night time flight from Texas to Florida and back. He was the copilot.

At the start of the video he is recording the city lights below, using the night vision setting on his camera, when the pilots points out a bright object passing above there aircraft. He video records the object and the pilot calls on the radio saying that he has several objects in front of them.

Another plane pilot say he has them in sight. Yet another asks ATC if they had a report at 410. ATC reports that they might see traffic 3 miles ahead and instructs the jet to turn left. Another voice comes on the radio saying it is the planet Venus.

The pilots want to remain unknown for professional reasons so don’t ask me the names, dates, or aircraft information. This is real video, recorded in a real jet airplane, on a real trip.

The audio is the recording of the real pilots and ATC radio communications. 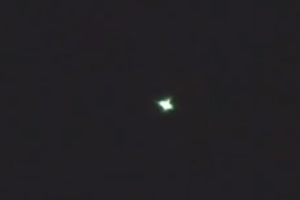