Every morning, I go through my usual UFO news feeds to see what the Americans have been reporting while I’ve been getting my beauty sleep (UFOEyes is based out of Europe). The recent sighting reports over at MUFON is one of my favorite stops, as you never know what you’ll come across. Today, a sighting over Manhattan piqued my interest. Not because it was particularly awe-inspiring, but because it was reported and written down in 1861.

The report to MUFON was submitted yesterday and came attached with a 1858 baptism register from St. Peters church in Jersey City. The person who submitted the report came across the UFO description while searching through rolls of microfilm for clues about his family’s arrival in the country.

The priest’s description of the sighting reads like this (notice the illustration in the lower left and upper right corner):

Mr. Healey told me today that Mrs. T. Richard Kinder was looking out her garrit window (in nyc) on the nite of March 29, 1861 in the direction of the church of the transfiguration at about 12 oclock. The nite was clear and dark with no moon when she saw a luminous cross in the sky with light eminating from around the head as it moved directionally across the sky. She awoke her husband Richard and he saw it also. 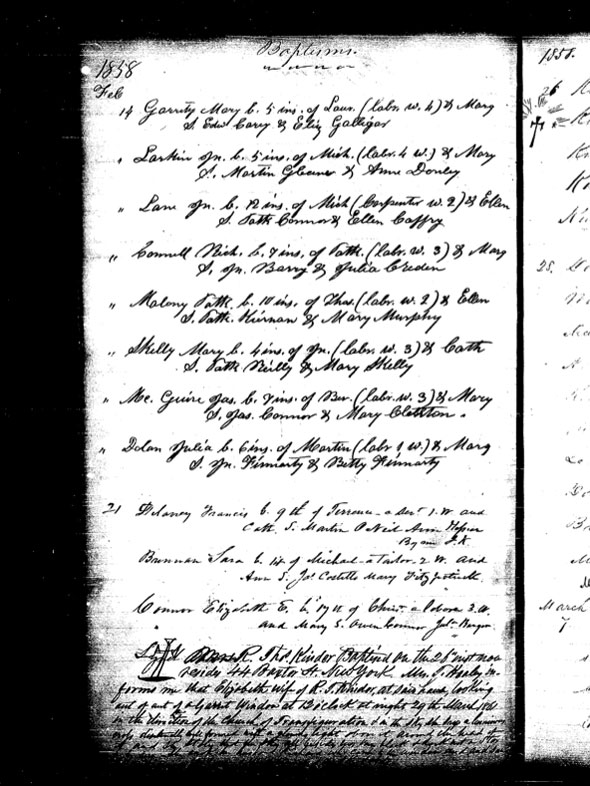 The MUFON submitter points out that “in 1861, there were no airplanes, no tall buildings but churches, no television, no reality shows to make you famous, and so I believe the woman and her husband saw something sincerely and told a priest thinking it was a vision from god.” He then goes on to present his own theory that “the light emanating from the head of the cross was obviously a cockpits light and the cross was a craft.”

To see if the sighting could be corroborated, he researched local newspapers at the time and found a story that leads him to believe that the story has merit:

I found a very interesting story that on canal street about 6 blocks away from Baxter street, a warehouse, a book bindery and a LABOROATORY went on fire and the entire city block burned to the ground the same evening as the cross in the sky.

My theory is this: the cross was a type aircraft. the fire illuminated the belly of this metallic aircraft and so its fusilage glowed like a cross as the flames from the fire lit it up from below otherwise it never would have been noticed. remember according to the witness it was dark and clear with no moon. I also wonder what was in the laboratory that burned down.

With scant information at hand, that’s a theory as good as any I suppose. The particulars of what Mr. and Mrs. Kinder actually saw may be lost in the mists of time, but I just love reading these old reports of ordinary people getting a peak of the unknown.