A video allegedly taken just before Christmas during a late-night flight appears to show a UFO flying next to the plane. The video, posted to YouTube by Mauricio Ruiz, has the Internet buzzing.

Mr. Ruiz says he captured the footage on a flight from New York to Chicago on December 19, 2012. According to Mr. Ruiz, the footage has been sent to the FAA (Federal Aviation Administration) for further review.

At first sight, one would think the object is one of the aircraft’s navigation lights, but as can be seen in the video, it is not. My second best guess would be a window reflection, but Mr. Ruiz’s description of the sighting does not fit that theory.

Any UFOEyes readers want to take a stab at this one?

49 quadrocopters with lights roam the night sky in formation 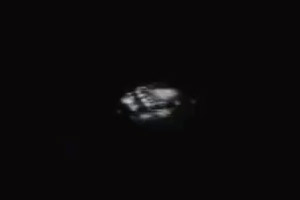