A security camera from an oil company based in Cotulla, Texas has allegedly captured a disk-shaped UFO hovering only inches from the ground. The below report was submitted to MUFON on January 5, 2013, but the incident took place back in early July, 2012.

What we’re looking at is a still image from the security camera. 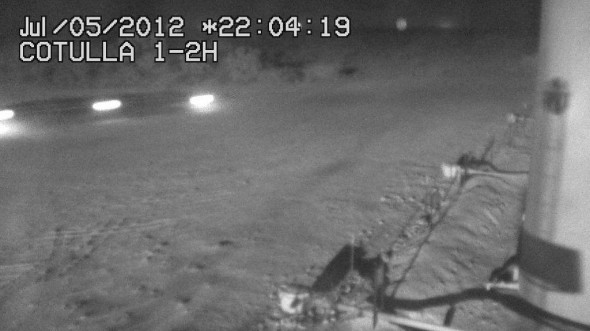 The short report that was sent to MUFON reads as following:

My father works in an oil company here in Texas, and they had noticed that some people were taking the crude oil in the night. So they started putting cameras up around the areas. One night one camera caught a UFO.

The news had spread throught the workers and they soon emailed to my father. My father had sent it to me and now Im posting it here on mufon. When I saw the picture I couldnt believe how the shape was, it was what I had expected. More so since it was also hovering off the ground.

I was used to different ufos mainly because I have seen some since I was a kid. It really got to me that I now have proof of the existence of these entities.

Now, my warning bells always start ringing when someone claims to see UFOs on a regular basis, but I’ll admit that it would be interesting to see the actual recording of this event, if only to uncover what kind of man-made vehicle is behind those peculiar lights.