UFO filmed from plane at 30,000 feet over the ocean

This is very intriguing footage, if the description of the circumstances prove to be correct.

According to the YouTube user who uploaded the video, the footage was captured on December 29, 2012 by his brother who was on a flight from Florida to Philadelphia.

Other passengers saw the same blue light and the FAA has apparently been contacted. Any takes on this one?

Recently my brother was on a flight back from Florida and they were over the ocean and were told they were over 30,000 feet high. My brother just happened to be filming outside his window and what he captured was amazing and shocking. This is not some bullshit video as it is 100% real.

Other passengers on the plane at the window saw the same thing but only my brother and another lady had time to shoot it. My brother not only shot it but took video of it. It clear is a UFO and the shocking thing is this thing did not move. It was hovering and its not a weather balloon or sate-light . It has a large glowing blue dome and is glowing and as the plane moved it stayed still. It also appeared to just hover there and was bigger than a bill board you would see on a highway and the shape is almost a triangle.

The FAA is already aware of it as it was reported by people on the flight and the pilots ran out of the cock pit as soon as the plane landed. Tommy Dreamer actually met with my brother to view the footage and he is even shocked at it. There is an investigation under way as this is clearly something out of a UFO movie. He is also contacting CNN and other media outlets about this. I have pictures too but here is the video!!!!

UFO captured by passanger on a plane from Hong Kong 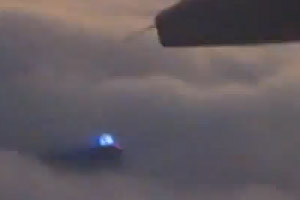