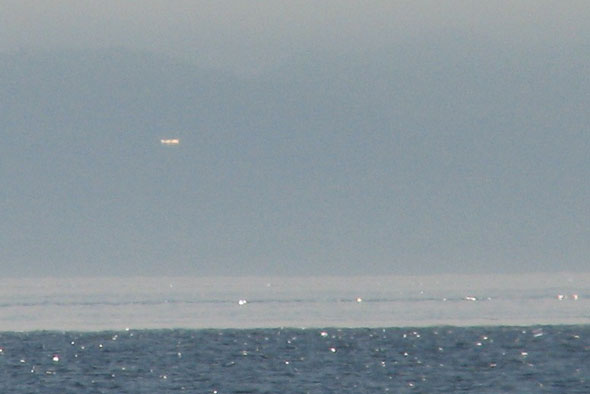 On September 14, 2012, at around 15:30 (3:30pm), a cluster of three bright lights could be seen hovering above the ocean close to Vancouver Island, according to a recent report to MUFON.

We were sitting on the beach off Dallas Road, in Victoria B.C, (Vancouver Island), when across the water I noticed some bright lights hovering above the ocean. It was odd to see such a bright, large object in the middle of the afternoon, on a beautiful sunny day. The object appeared to be somewhat cylindrical, but with 3 almost separate, glowing parts.

Shortly after I started taking photos, I noticed that 2 black helicopters had now appeared as well, and seemed to be flying around the object; one of the bright spots, on the right side appeared to get larger, as if it was turning with the arrival of the helicopters. I continued to take several photos, eventually the object seemed to just evaporate in the distance.

There was no significant movement of the object, it seemed to just hover above the ocean. Upon further investigation of my photos, it would appear that there was a significant heat source emitting from the object, as when I zoomed in (on my computer), it was obvious that the color of the pixels changed from the center outward, becoming almost a pale green around the edge. 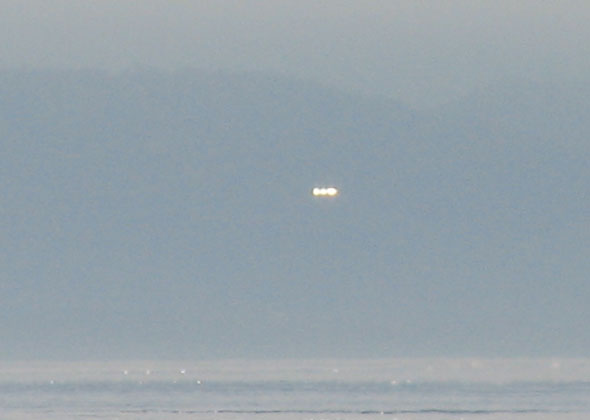 Close-up of the Vancouver Island UFO photographed on September 13, 2012.

These lights look remarkably similar to the UFOs that have been sighted over Myrtle Beach, South Carolina in the last couple of months. 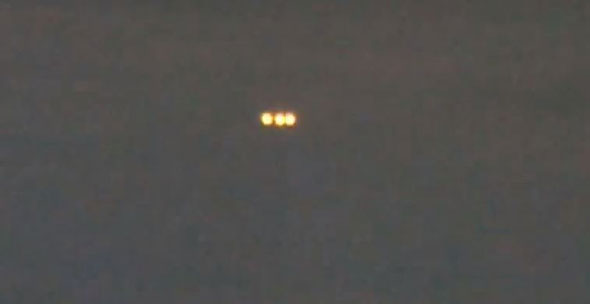 Any ideas on what we might be looking at here?