Niagara Falls UFO a light pillar after all?

In October 2009, a strange light phenomenon was reported over Niagara Falls (The Niagara Falls Review, Niagara Gazette). Several witnesses reported seeing something in the sky that appeared to be reflecting the city’s downtown searchlights. The phenomenon has been filmed and photographed countless of times since then.

Last Friday, I wrote about Swedish UFO enthusiast J.M. and his investigations into the phenomenon. Now, about a week later, he might have come up with an explanation.

I think I have an answer, even if it hurts to say it. This can very well be a new, previously undocumented type of broken light pillar phenomenon that appears in the relatively strange weather conditions that exist in and around the Niagara Falls. There are two huge waterfalls here and 2 huge lakes. The reason it looked and appeared so “alien” is that they usually do that anyway and that there are very bright searchlights in downtown Niagara Falls that interfere with the phenomenon in a way never before documented.

He’s been doing some pretty extensive research, and you can read all about it on his blog Hunting for Truth. 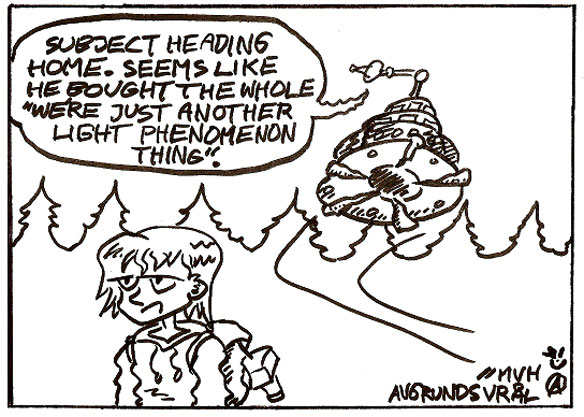 Discuss this article in our newly launched forum! →

The UFO over Niagara that keeps coming back