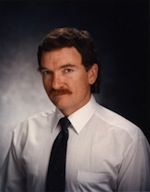 Travis Walton is an American logger who claims to have been abducted by a UFO on November 5, 1975. The alleged abduction took place in the Apache-Sitgreaves National Forest in Arizona and was witnessed by several of Travis’s co-workers. Travis was missing for 5 days, until his brother-in-law received a phone call from a nearby gas station. The caller claimed to be Travis.

They found him lying in one of the telephone booths at the gas station, confused and in bad shape. He was afraid and anxious, and repeatedly mumbled on about beings with terrifying eyes.

The story that then unfolded revealed a classic abduction case — alien creatures with big eyes, some sort of medical examination, memory loss. But as with any abduction case, the problem with Travis’s story is the lack of any substantial physical evidence. Still, it’s one of the more intriguing ones and as many of you know, it led to a movie that was released in 1993 — Fire in the Sky (IMDB).

I was intrigued to find out that there’s an interview with Travis Walton in the December issue of the Alternate Perceptions Magazine. It has been 35 years since the alleged abduction and Travis is sticking to his guns about what happened. You can read the whole interview over at the Alternate Perceptions website and a detailed account of the abduction can be found on Travis’s website.

What’s your take on abductions stories like this one? Personally, I’m skeptical, but intrigued.

Listen to the Angelia Joiner interview with Jim Penniston