Is there a UFO base hiding in the Himalayas near the Kongka La pass? 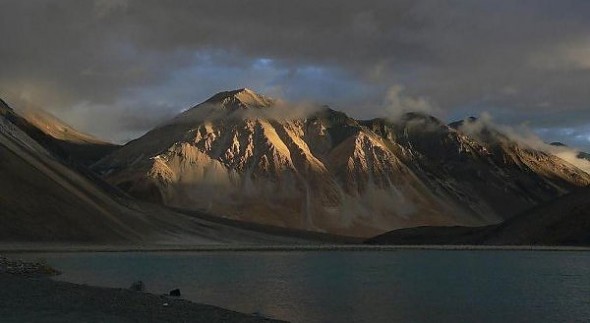 The Kongka La pass in the Himalayas is as remote as it gets. Sitting on the disputed border between India and China, the high mountain pass (elevation 5,159 m) is one of the least accessed areas in the world. After the Sino-Indian war of 1962, India and China have agreed to not patrol this part of the border.

Recently, an old India Daily editorial from January 9, 2005 has resurfaced in a shortened, edited form. Naturally, several conspiracy sites and UFO forums have picked up on the article and discussions about its validity have started again.

Below is the original article that was published on the India Daily website on January 9, 2005. It has long since been deleted, but can still be accessed via the Internet Archive. 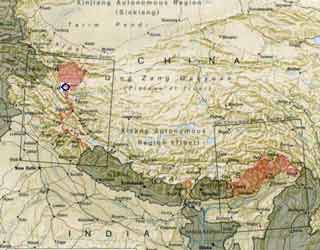 Kongka La is the low ridge pass in the Himalayas (the blue oval in the map). It is in the disputed India-China border area in Ladakh. In the map the red zone is the disputed area still under Chinese control in the Aksai Chin area. The Chinese held northeastern part is known as Aksai Chin and Indian South West is known as Ladakh. This was where Indian and Chinese army fought major war in 1962.

The area is one of the least accessed area in the world and by agreement the two countries do not patrol that part of the border. According to many tourists, Buddhist monks and the local people of Ladakh, Indian Army and Chinese Military maintain the line of control. But there is something much more serious happening in this area.

Recently, some Hindu pilgrims on their way to Mount Kailash from the Western pass, came across strange lights in the sky. The local guides while in the Chinese territory told them that this was nothing new and is a normal phenomenon from Kongka Pass area the tensed border between India and China.

This strange lighted triangular silent crafts show up from underground and moves almost vertically up. Some of the adventurous pilgrims wanted to look into the site. They were first turned by the Chinese guard posts as they were refused entry from the Chinese side and then when they tried to approach the site from Indian side, the Indian border patrol also turned them down in spite of their permit to travel between the two countries. 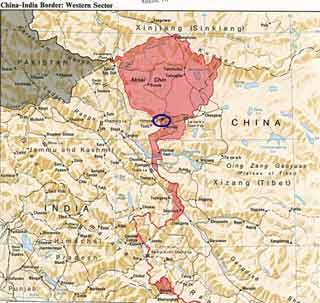 The pilgrims at that stage started quizzing the Indian border petrol personnel. According to them, the security personnel told them that they are ordered not to allow any one near the area of interest and it is true that strange objects come out from under the ground with amplified and modulated lights. India’s Special Forces and possible visit the area by intelligence agencies.

The locals start laughing in that area when they are asked about these UFO sightings. According to them the extra-terrestrial presence is well known and is in deep into the ground. They believe neither the Indian or Chinese Governments want to expose the fact for some reason. When they bring up thus matter to local Governments, they are told to keep quiet.

This is the region where the Euresian plate and the Indian plate have created convergent plate boundaries. Convergent plate boundaries are formed where one plate dives under another. Thus this is one of the very few areas in the world where the depth of the crust twice as much as in other places. The opposite is found in hot spots like Yellow Stone National Park in America where the earth’s crust in thin.   The double thick earth crust allows the creation of underground bases deep into the tectonic plates. 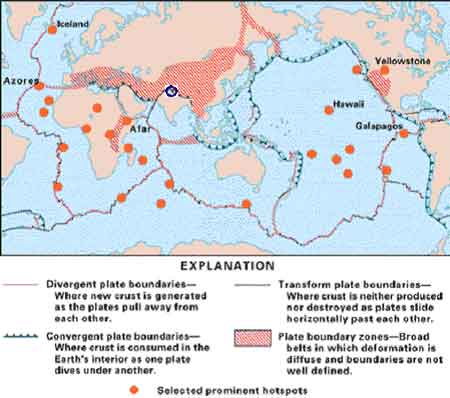 Kongka La has beautiful rocks and granites. For some strange reasons neither Chinese nor Indian authorities ever excavate, dig or mine holes in this area. The area is pristine and untouched. Recently, both India and China have moved forward to solve all border disputes and start the Sino-Indian relations all over again. The Aksai Chin area is still disputed. But interesting while negotiations both the Governments are indifferent on this area. India and China as shown in the accompanying maps have huge border along the Himalayas and they are negotiating on all these regions.

Though India claims that Aksai Chin is part of India, the common belief in the Government, it is not a show stopper. On the other hand, Chinese after winning Aksai Chin from India in 1962 war, built a strategic military highway. Now they are using an alternate highway no to bother with the area in Kongka La.

Recently in the local school, young children of the area entered into a drawing contest. More than half of the drawings had to do with strange objects in the sky and some coming out of the mountains. Many of them even know what and when to look for.  Many UFO researchers believe that there are hidden UFO bases under the ocean and deep under the ground.

Kongka La is experiencing some strange phenomenon and suspicious objects coming out of the inaccessible huge mountains (Himalayas) and both the Governments refuse to come out and say what these are.   The other alternative is that it is an underground strategic Air Force base of some one. Then why will either country allow the base on the official no man’s land in the highly sensitive disputed border areas?

Why is this region continuously reporting UFO sightings from various kinds of people?

WikiLeaks and the UFO movement