This image was taken by Curiosity on Sol 61 (October 7, 2012). After examining the image, the rover team decided to refrain from using the rover’s arm on Sol 62. Instead, it was instructed to take additional photos of the bright object to aid the team in assessing possible impact, if any, to sampling activities.

It might be a piece of the rover hardware, but what if it’s not? 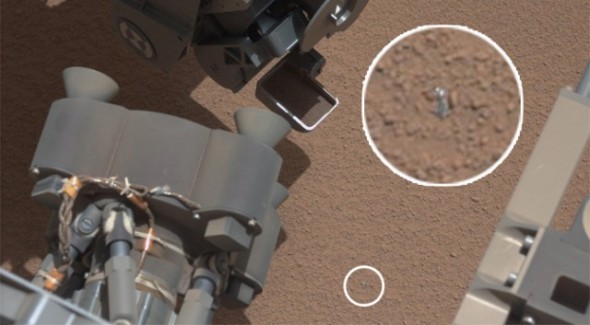 Zoomed in, it kind of looks like a dead insect. 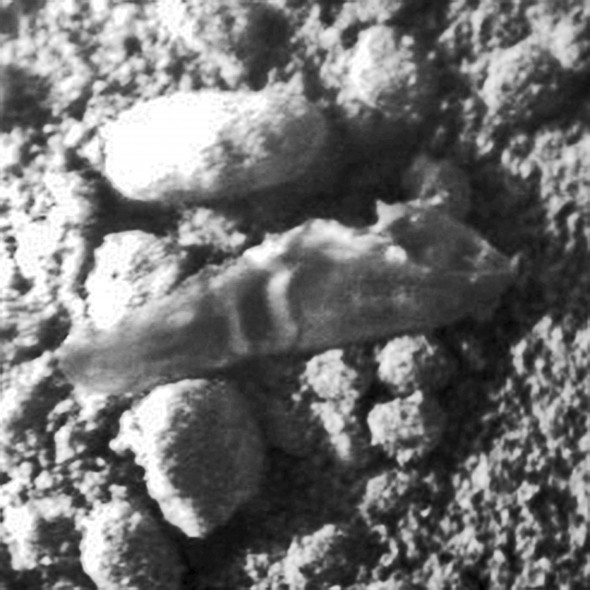 NASA has posted a rather vague statement about the finding, saying it’s most likely benign plastic. Reading between the lines it seems like there’s still internal debate over exactly what it is.

Curiosity’s main activity in the 62nd sol of the mission (Oct. 8, 2012) was to image a small, bright object on the ground using the Remote Micro-Imager of the Chemistry and Camera (ChemCam) instrument.
The rover team’s assessment is that the bright object is something from the rover, not Martian material. It appears to be a shred of plastic material, likely benign, but it has not been definitively identified.

To proceed cautiously, the team is continuing the investigation for another day before deciding whether to resume processing of the sample in the scoop. Plans include imaging of surroundings with the Mastcam.

A sample of sand and dust scooped up on Sol 61 remains in the scoop. Plans to transfer it from the scoop into other chambers of the sample-processing device were postponed as a precaution during planning for Sol 62 after the small, bright object was detected in an image from the Mast Camera (Mastcam).

Images from Sol 63, which might contain new pictures of the object, can be found here when NASA releases them.

UFO on recent Curiosity photo probably a speck of dust