Team of skydivers behind the recent Cincinnati UFOs 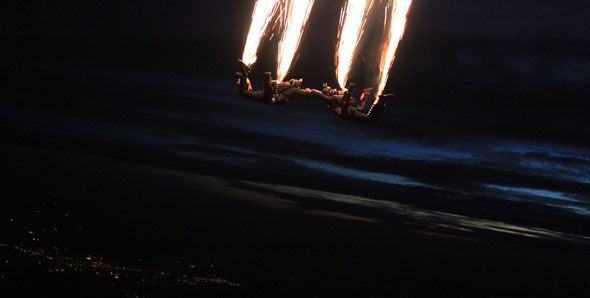 The mystery with the three descending UFOs that were recently filmed over Cincinnati, Ohio has now been solved. Once again, we can blame those pesky skydivers and their fancy pyrotechnics. Yahoo reports:

Soon after the video went up, several people who also saw the mystery lights posted comments stating their locations at the time of their sightings and the direction in which they saw the lights. Galuyasdi reported in the video’s comment thread that he used this crowdsourced information to pinpoint the location of the lights to less than a mile south of the Wal-Mart parking lot.

Then, a commenter named Geekchiic posted that the lights were a team of professional skydivers working for an organization called Start Skydiving, which puts on pyrotechnics shows throughout the Midwest. “We do demonstration jumps into various locations around the country,” Geekchiic wrote. And indeed, Start Skydiving did a pyrotechnics jump Friday night during the halftime show of a football game at La Salle High School, whose stadium is about a mile south of Wal-Mart.

“I am pleased to acknowledge that we were the team that skydived into the La Salle Lancers Stadium in Cincinnati, Ohio on the night of September 28th, 2012,” John Hart, another member of the skydiving team, commented, adding, “It’s not the first time we have been UFOs.”

Original footage of the recent UFOs over Utah