According to a National Geographic survey, many Americans believe that extraterrestrials have visited earth. U.S. News reports:

Either Americans don’t trust their government, or they have a lot of respect for aliens’ stealthiness. 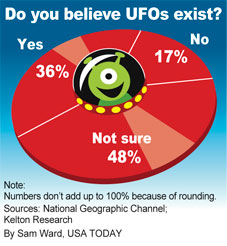 Anyway, the survey is published just days before the premiere of the National Geographic Channel’s new show “Chasing UFOs”, which has received reviews ranging from bad to horrible. Says Los Angeles Times about the show:

In the premiere, the team heads to Texas where they see videotaped evidence of mysterious lights that have been spotted in the sky. The video was shot by a law enforcement dashboard cam, and is basically an image of a light in the night sky.

Is it a UFO? Very likely, in that it is an object, it seems to be flying and it hasn’t been identified. Is it an alien spacecraft? Not likely. Yet that seems to be the first conclusion of the “Chasing” team. Whatever evidence is found, it is simply taken at face value.

I can’t decide — is this simply a continuation of the dumbing down of the UFO phenomenon, or a not-so-subtle way to bring awareness to what the world’s governments already know to be true? Or maybe there’s just money in the UFO game, I don’t know…