This was captured over Stouffville, Ontario on May 20, 2012. According to the witness:

On May 20th 2012 five of us witnessed what we feel was a UFO sighting. It was definitely not an airplane, helicopter, comet, meteor, asteroid, flares, fireworks, balloon, fighter jets or anything else that I’ve seen before. There were no engine noises – totally silent.

I have no idea what it was, but I know what it wasn’t. We saw two extremely bright red lights coming from the north of where we live. They moved in unison, as if attached to something larger, they headed southwards, turned to the west, and the disappeared – just like someone dimmed the lights and then turned them off. Two minutes later it (or another set of 2 lights) appeared where the 1st set came from and did the exact same thing – fly south, then west, then just disappeared.

Two additional people in our neighbourhood saw the exact same thing – in total, 6 adults & an 11 year old. This is the video of the 2nd occurrence. My camera date and time stamped it May 20th 2012 8:38pm EST. The only thing I did to the video was use a software tool to remove and smooth out the background noise.

You decide for yourself what this is.

Something out of the ordinary, or simply another case of: 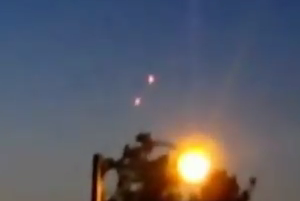