The video below was allegedly captured over Newnan, Georgia on April 29, 2012, and was reported to MUFON on May 9 together with the following report:

I was coming home from the store when I noticed two triangular objects flying over a wooded area about 5 blocks from my house. objects were changing color. it did not appear that they had lights on them but they appeared to be made of light. one was prominently green, the other was prominently blue.

at first I thought someone was flying “kites with lights” I say that because they were moving like kites move when someone is doing tricks (dipping and ascending rapidly then hovering) I ruled out the kite theory immediately as they were flying over a wooded area (and what idiot would fly a kite in the woods) I also thought of a hang glider but there is no take off point for hang gliders where I live.

anyway I saw another car sitting at a stop sign adjacent to the one I was sitting at I approached the car and asked the occupant if they saw what I was seeing (to make sure I wasnt loosing it!) she said yes. so now realizing I wasnt halucinating, I rushed home to get my camera.

by the time I got back to the spot were I saw the objects it was only one left (the blue one) on the video you can hear the crickets, you can hear my voice, you can hear the cars passing by. but you cannot hear any noise coming from the object. I was very nervous, my hands were shaking, my heart was racing plus I was on full zoom, so the footage is a bit shaky.

I was trying to zoom in so one could see the shape of the object and zoom back out so one could see the way it was moving. it was making sharp turns that Ive never seen any plane or helicoptor make (as I said it was like a kite) it would get small and then big very quickly as it moved far away and then near again. one of the times when I tried to zoom in (which wouldve been a perfect shot) the object became blury but you can see that it is changing color.

I’m leaning towards RC airplane with LEDs, but it’s hard to say. 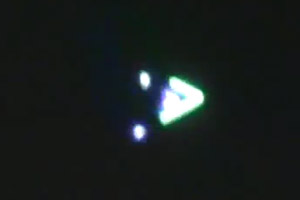