On September 18, 2012, two glowing orb-like UFOs were captured on video over Pheonix, Arizona. According to the the eyewitness:

My neighbor came and knocked on my door and was freaking out saying something about UFO’s, I walked out front and saw two orange orbs floating over the city, they definitely weren’t planes. I ran inside to grab my camera but when I got back out they had disappeared, my neighbor said she saw them go out like someone switched out the light.

After a few minutes she went back inside, I continued to look for them and saw them reappear in a different part of the sky and thats when I started filming. Around 3:30 they both disappear as a plane approaches and then one of them reappears in a different spot.

Maybe theres an explanation, but as of now they’re unidentified….

Flares, lanterns, planes or something else entirely? 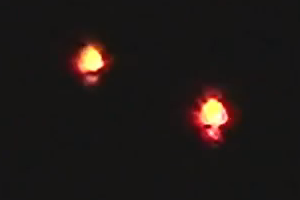