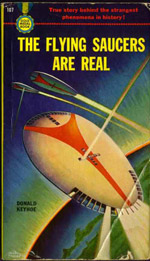 The Flying Saucers Are Real was one of the first books published about the UFO phenomena, written by Donald Keyhoe in 1950. It has since then been released in the public domain, which means it can be legally downloaded for free. You can find the whole book in text format at The Sacred Texts Archive. It’s also available from Amazon, and the Kindle version is really cheap.

Donald Keyhoe (1897-1988) was an American Marine Corps naval aviator and a writer. In the 1950s he became well-known as a UFO researcher, arguing that the U.S. government should conduct appropriate research in UFO matters, and should release all its UFO files.

The Flying Saucers Are Real sold over half a million copies in paperback. Keyhoe wrote several more books about UFOs, with Flying Saucers From Outer Space being another of his famous works.

The Flying Saucers Are Real is well worth a read, so go ahead and download the free text version or get the book from Amazon.

Have you already read it? Please share your comments below!