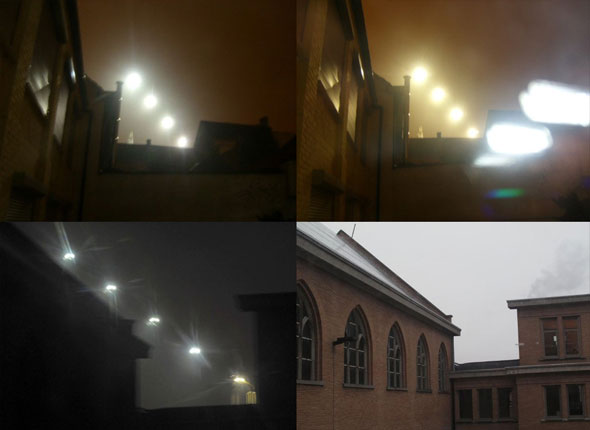 At about 1am in the morning of February 28, 2013, Jean-Claude of Ronse, Belgium awoke to a light so bright the whole bedroom was illuminated. He got out of bed and was amazed to see five spherical lights suspended in the sky outside his apartment. He quickly grabbed his camera and snapped the following photo. 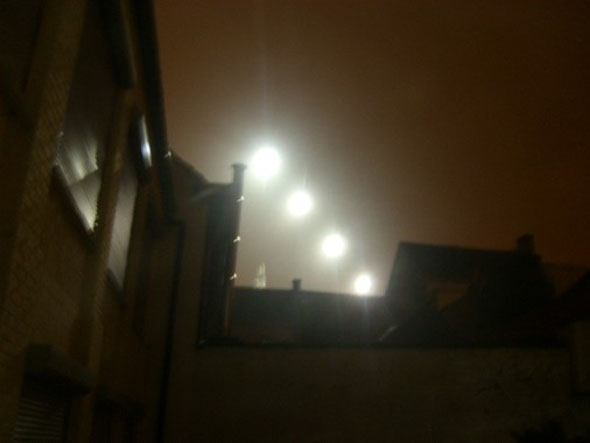 One floor above, Johny Deconinck was awoken by the same lights and took this picture: 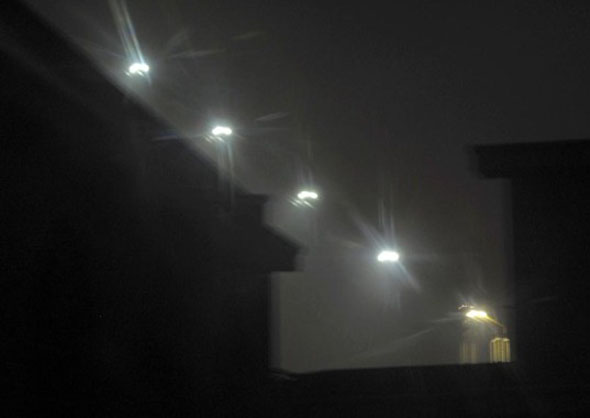 The sighting was covered by a local newspaper, and a reporter contacted the Belgian Air Force to ask if they had any knowledge of the lights. However, no aircraft were in the area during the sighting and nothing was seen on radar.

A photo of the same area taken during the day shows nothing out of the ordinary, however some speculate that a mobile crane used to repair cellphone towers could have been responsible for the lights. 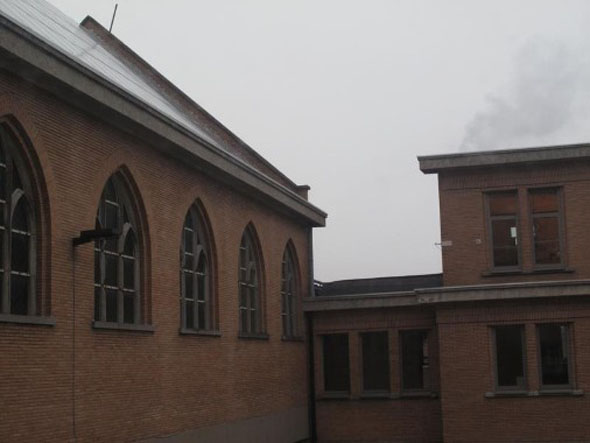 You can read the original article in Dutch here, or have a look at the Google translation below.

RONSE – On the night of Wednesday to Thursday, several people five bright lights seen in the vicinity of the College. “It was so bright that we were awake,” says Jean-Claude. Johny Deconinck also saw the lights and photographed them.

A little after 1 am Thursday morning, there were five mysterious lights seen in the vicinity of the College. Johny Deconinck interrupted his sleep for a sanitary break and saw them. “I had to go to the bathroom and the room was very brightly lit,” he says. “I made my wife awake and together we watched the phenomenon. We thought to work on the Belgacom mast or something, but it was there just before we went to sleep nothing. I took a picture after five minutes and crawled back into bed.

In the morning we looked at the same place, but there was nothing to see. We know that there must be an explanation for the phenomenon, but what exactly is it we do not know. We thought still a tower crane, but between the lights, there is no structure to see. Bottom right I saw a structure that could be a staircase. A tower crane would be there the next day, of course, still have to stand, but there was nothing. It’s strange, so strange that the pictures I sent it to the contact point for UFOs. Since they let me know that they will contact me. ”

According to Frederick Delaere the hotline for UFOs is too early to know what the lights were. “I’m going through the photos to our photo specialist. It is too early to say what this might be, but we will definitely return. ”

Not only Johny saw the lights above Ronse, including Jean-Claude was awakened by the bright light. “Above our house there were spherical lights to see,” he says. “We have become awake. At midnight, two hours and four hours, I have seen them. The room was so brightly lit that it was difficult to sleep. Also I’d like to know was it could be. ”

Johny already sleeping with his camera beside his bed. “But the next night I have not seen,” he says.

According to the Military Service Aircraft movements were on the night of Wednesday to Thursday no overflights Ronse, not by foreign powers would exercise over our territory. When the police were also no reports. Who has seen the same lights, can always let us know by [email protected]