The following video and report was sent to MUFON on January 7, 2013. The person behind the report describes seeing a bright UFO flying over Venice, California on January 2, 2013.

Did you see it? Please leave a comment below.

1. I was looking at the sky. Ive seen these before(at a former neighbors) but never from my yard.

2. I was looking for the object.

4. One was red, one was white, like balloons, high in the Northern sky. They hovered, moving south west.

5. I dont like admitting this but I held up my hands and motioned for them to wait while I got my video camera from inside. When I came back out I started videotaping.The first one I saw was gone but the other one continued to hover.(They essentially look like a small red dot or a small white dot in the shaky video.) I texted a neighbor who is very skeptical(Ive had other sightings and had recently confessed them to him. He ridiculed me so I wanted him to come over and see for himself. He declined.)

I continued to videotape them over the next hour and a half. There were five in all that I saw, though I only got four on video. One came closer than the others, flying East to West over my yard. This one was different in shape. The first ones were perfect spheres but this one looked to be at times like a triangle shape with multiple ball-like shapes protruding from it as it turned, seeming to change shape as it twisted. It appears to glow but it was also after 4:00 at this time and the sun tended to give everything, including planes, a bit of a glow. At this point I called for my fiancee to come outside and see it.(Shes seen the white orbs before and isnt very interested but this one was closer and oddly shaped so I insisted she take a look.)

6. I followed/filmed the object as it flew overhead(I bent over backward in my chair, eventually filming it upside down) until I lost sight as it disappeared over another neighbors house. (From seeing this particular object until it was gone took about 6 1/2 minutes.) I had similar sightings(which I also videotaped) over the next two days (Jan 2, 3 & 4) all around the same time, 3:00 p.m. (To be fair, thats the time that I would really sit down to look.)

What was the luminous UFO captured over Fresno, California on May 11, 2012? 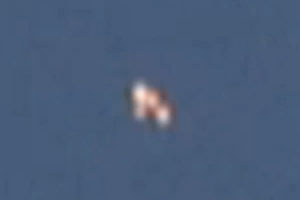