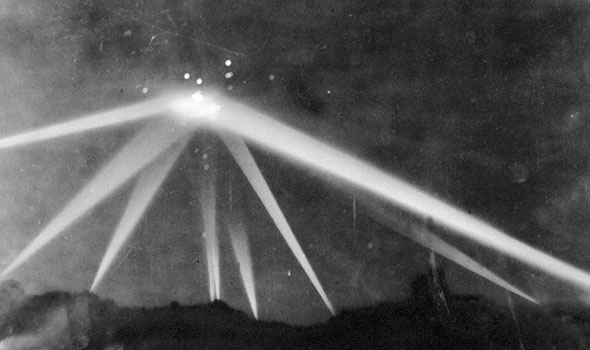 These are the latest UFO reports that you, the readers, have submitted to UFOEyes. If you have witnessed a UFO, please tell us about your experience by clicking on Report a UFO sighting to the right. Thanks!

On May 22, 2012, an anonymous reader reported this sighting over Ontario, California (click for map):

Air traffic control at socal tracon (east feeder sector, 124.05 frequency, Los Angeles Arrivals) cube like object that grew in size from 2x2x2 to nearly 10x10x10 and disappeared. Reported to two aircraft descending out of 14000ft inbound to lax. (air Canada at approximately 1735z, and a United Airlines at approximately 1740z.

4:00 am. Beautiful bright light hovering on top of Franklin mountains. Appeared white in color also seemed to have some sort of red tiny light that would show up spontaneously. It hovered for about 4 minutes- going dim, to nearly invisible, then bright again.

Another smaller light appeared to the lower right of it and it appeared to have unstable light sequences of red, blue and purple. It gave the illusion of moving closer to my proximity then vanishing. Luckily these objects were caught on video! These lights remained until 4:40 am. Very astonishing to witness.

On July 23, 2012, a UFOEyes reader reported this sighting over Ballingry, UK. Date of sighting unknown.

At around 10pm I was walking with a friend when we saw a cigar shaped large craft with a blue hue around it. We looked at each other and without saying a word panicked and ran into an older couple who obviously saw what we saw and were walking in front of us. We ran for around five minutes until we reached a high place but when we looked around there was no sign of the craft.

We both went home and forgot about the incident. That is when it became a strange story because I had no recollection of this incident until a number of years later when watching the Eamonn Andrews talk show. He had a guest who was describing a similar object. Then the memory clicked. Some months later I approached the friend who I really thought had been with me but didn’t have a clue what I was talking about so I was afraid to mention it to anyone again.

Until one night I was with another friend and plucked up courage to mention the incident. Then he said that he was the person who was with me and he had thought it was someone else who had been with him. I am now 58 years old and the incident must have happened in my early teens, but due to the circumstances I have no idea of dates. I have never heard of anyone with a similar tale of memory loss and confusion over details of who was there.

My son and I were arriving home and I noticed a parade of slow moving orange lights moving from south to east just shortly after 11pm est. I turned off the car to see if there was any noise and i did not hear any airplane or helicoptor noise. It was silent and the lights were fairly slow moving ( the normal planes that fly over routinely fly much faster). There was at least 10 to 12 lights that passed before I went in to get my son in bed. 5 minutes later I went and looked out of my eastern facing bedroom window and witnessed the final two slowly dipping below my line of sight. All of the lights appeared to be similar. Orange glowing spheres that flickered slightly (but did not flash as a plane or helicopter would).

Lastly, we have an anonymous report of lights over Altadena, California seen on August 11, 2012:

About ten lights clustered following eachother, then they all stopped, one flew over to one other one, and they touched, then they started moving again towards west, near JPL(jet propulsion laboratory.

Thanks so much you guys for submitting your UFO sightings — very much appreciated! Keep ‘em coming!

The Today Show at MSNBC.com reports on the Jerusalem UFO

Believe in aliens? 86% of CNN readers do too.