Better footage of the UFOs over American Fork, Utah

Here’s another video of the flare like objects that were seen over American Fork, Utah on January 26, 2011 (thanks Gil!). The footage that was featured in the ABC4 news report can be seen here.

Pulling into my driveway the night of the 26th, my 10 year old says “Dad, what are those?” I had a flipcam in the seat next to me so I started filming. 6 minutes later, they drifted out of view. They were hovering in perfect formation and once in a while dropped sparkler-type things. I figured the news would explain it later that night, but they didn’t. ABC4 was the only newscast to carry the story. Lots of witnesses, this is the best vid of the lights that I’ve seen posted. Who knows??

Local artist behind the UFOs over American Fork, Utah?

Original footage of the recent UFOs over Utah

New footage of the orange, orb-like UFOs over Moscow 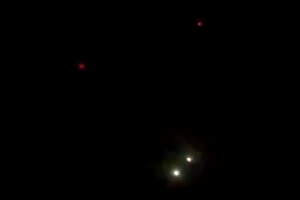