Another shaky video, this time from Três Pontas, Brazil. Captured on August 26, 2012, the footage show a dark object seemingly hovering in the sky. Stabilized version below.

Images recorded by four teenagers on Sunday (26) in Three Points (MG) raise doubts about the supposed appearance of a flying saucer in southern Minas. The video was uploaded by Internet users Lais Aparecida da Silva Correia to the “Vc in G1.” Images were recorded around 15h in the backyard of a house in the neighborhood Filadélfia, where the children played in the yard with a camera.

In the video, the UFO (Unidentified Flying Object) appears between the clouds. When kids drive the zoom of the equipment, the object is in focus for a few seconds in the center of the screen. Shortly after, the object disappears quickly. During recording, you can hear the expression of astonishment adolescents. “You can see just right.’s A ship, I’m sure.” Say the children.
According to the lawyer Lais Aparecida da Silva Correia, who uploaded the video, everyone was scared after recording. “They saw something strange in the sky and began to shout. Then they called adults. Seems quite a ship. We thought best to send the video to know what actually it is,” she said.

The report of the G1 southern Minas contacted by email with a spokesperson for the Brazilian Air Force (FAB), but until this publication has not received feedback on registering a UFO in airspace South of Minas Gerais.

Yet another well-done fake UFO video — this time from Brazil 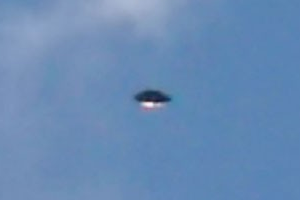 UFO spotted over Longford, Ireland on March 9, 2013
Posted 7 years ago