1977 color photos of a UFO flying over Floridad, Uruguay

OpenMinds Magazine has released a collection of UFO photographs taken by Hector Delgado in Floridad, Uruguay in 1977. Read the article over at the OpenMinds website and check out the original report and photo analysis below. (PDFs available at the OM website.) 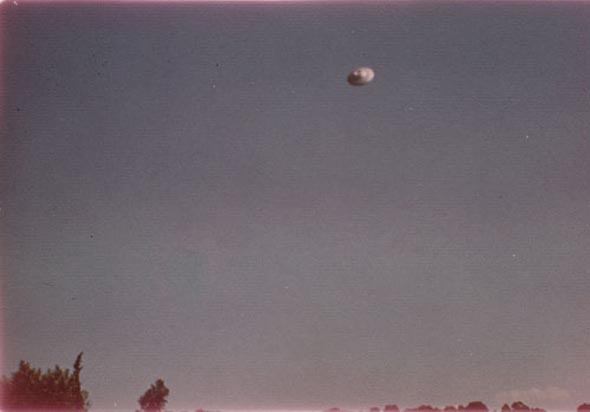 At about 15:30 hours on 11 July 1977, Sr. Hector Rufino Delgado, 29 years old, a horticulturist, was working in his greenhouse at the rear of his home. It was a magnificent day with an almost cloudless clear blue sky and the temperature, in spite of the season of the year, was almost springlike, A light breeze was blowing from the eastern quadrant.

Suddenly, Sr. Delgado percieved a high pitched humming sound “Something like that produced by an electric motor, or a ventilator”, according to his own words. He nevertheless paid little attention to it and continued with his work. The humming increased in intensity, but a few seconds later it decreased until it was almost impercpetible. In less than a minute the humming came back to audible level again and increased once more, this time it had a tone a little sharper and with greater intensity. “It was not constant, but its intensity increased and decreased perceptibly and the same with the tone”, declared Rufino Delgado.

The witness, a few seconds later, began to wonder, questioning himself about the possible origin of the sound. He laid down the work tools he was using and went to the doorway and looked out. It was then that he saw some 200 meters from his position and no more than 50 meters above the ground, a silver disc-shaped object moving smoothely suspended in the air. “I was slow to react; never had the thought occurred to me that I might encounter a thing like this… but there it was swinging gently as it balanced itself in the air a few meters above the ground”, assured the witness.

After a few moments of indecision, Rufino Delgado remembered his camera and that it was loaded with color film, for which he ran to the house (some 100 meters away) grabbed his camera and raced back, fearing that the strange object might have gone. “I ran as fast as I could. When I was looking for my camera in my house, I wondered if it would really be worth while to photograph the object, or whether it would be there when I came out of the house and got back to the greenhouse, however from the doorway of my house I saw it again no longer suspended motionless in the air but moving very slowly toward the south”.

While running back to the door of the bouse, the witness adjusted his camera for speed and conditions of light, selecting a shutter speed of 1/125th second and an aparture of f:11. He barely arrived at the greenhouse when he stopped to take a picture but he noticed that the trees would get in the way due to their location some meters away near the limites of his property. “When I took the first photograph the UFO was still moving very slowly toward the south, but he had barely snapped it when the object drastically altered its velocity and trajectory and commenced climbing manoevers as it increased its elevation above the ground”, declared the witness.

The object, continually changing its velocity, began to circle the position of the witness, performing a sort of dance around him. “At times it was very difficult to follow it with the camera, at times appearing absolutely immobile and then jumping to extreme velocity in a question of moments. At the same time performing the most incredible manoevers, withdrawing and then reapproaching my position again. Really it is difficult to describe the movements of that thing, I tried to get as many photographs as possible, but at times it escaped the viewfinder of my camera. Also I was extremely excited, so much so that, without taking notice, I had followed it around and when it finally departed I was more than 50 meters from the place where I took the first picture”.

The object flew two circles around the position of the witness and then departed toward the northeast at a velocity that the witness called ‘escalofriante’ (chilling).

The duration of the sighting lasted some 3 minutes however we must take into account the fact that the witness heard the humming sound for a time before he saw the object. The object must have been present in the vicinity at least 6 minutes. The closest the object came to the witness was some 50 meters and the lowest elevation above the ground some 20 meters. Recalling the humm produced by the object, the witness remembered that it was somehow related to the speed and the manoevers performed by the object, so that the intensity and the tone of the sound increased or decreased as the velocity of the object increased or decreased. Also when the object performed a drastic manoever (for example a tight closed circle or a sudden stop) the sound became very sharp.

The seven photographs obtained by Sr. Hector Rufino Delgado did not add much to the narrative of the incident however the majority of them show the UFO at a substantial distance from the camera, too far to reveal much detail. The 3rd photograph of the series is without doubt the most clear and precise of the lot. It was obtained when the object made its closest approach to the witness, to within some 50 meters. The form of the object is notably similar to the object photographed by Ed Keffel and Joao Martins near Barra de Tijuca, in Brazil on May 1952. In this third picture one can also see that the object is rotating on its vertical axis at a considerable speed. In the first photograph of the sequence, in an upper right angle on the object, one can see a reddish or orangish point. This is a fault in the emulsion of the film.

The illumination of the scene is consistent with that expected at that site for the date and hour of the sighting (15:30 hrs). Five of the seven photographs were obtained facing the same direction, north. These are the last five. Photograph number two was taken as the camera faced east as well as for number one. This detail could contradict the report that the UFO circled the position of the witness. One could see at the shoulders of the witness, however, (southeast and south) a part of the greenhouse which made more difficult the observation of the object and the taking of sequential photographs.

In favor of the statement of Sr. Delgado, one could mention that the small clouds seen in photos numbers 3 to 7 did not undergo major changes or alterations, nor did they change their position with respect to the greenhouse that can be seen in the frame. This tends to confirm the brevity of the sighting in accordance with the statements of the photographer. In coroboration of this important aspect of the report, a few meters further from the place from where Delgado took the photographs, there extended a campground covered with weeds and other growth that would have made difficult any intent to obtain the photographs by means of the simple act of suspending a model of the object in the air and photographing it, and in any case it would have delayed the rate of taking the photographs. One can see that little time had passed by noting the form and position of the small clouds in the sky.

The diapositives (film Perutz 100 ASA) showed no evidence of manipulation or fakeing. The object that is shown is probably a solid object, apparently metallic of several meters in diameter.