I am sending three videos. One is from 4:00 AM, April 7, 2012, the others from April 11. This object seemed to respond in its appearance after I flashed it with my LED flashlight, and changed direction.

It was originally heading from east to west, but then changed direction and headed south after it “glowed intensely” until it disappeared.

I did not change the focus or any other settings, as you can see the stars remain the same before, during and after the orb glowed brightly.

The strange thing about this object was that it had a hole in the center, which can be clearly seen in my video. It makes it appear like a donut.

What do you guys think? Camera lens hunting for focus? 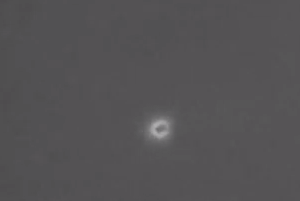