It’s only the moon getting in the way again 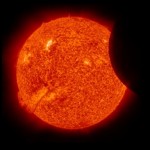 So, the video below is making the rounds on YouTube at the moment, showing us images from NASA’s Solar Dynamics Observatory (SDO) spacecraft. What we’re seeing here is unfortunately not Nibiru or Planet-X, but the moon passing in front of the sun.

The image to the left was taken by the SDO spacecraft at 03:05 on December 6, 2010. One month earlier, on November 6, 2010, NASA updated the SDO website with news about the moon passing between SDO and the sun, and they also informed us when the next lunar transit would occur:

Here comes the Moon! Right on schedule the Moon passes between SDO and the Sun, seen here in the AIA 171 bandpass. We use these transits to understand the pointing of the spacecraft. One of these transits will someday block out an active region so that we can study the energy in that region with EVE. Today’s transit covered part of the southern hemisphere, which is pretty quiet, and blocked the quietest part of that.

It seems they were right on the mark!

No UFOs in sight, but still an amazing Super Moon